The Miami Jewish Film Festival (MJFF), is proud to announce the program and plans for its upcoming milestone 25th edition, which will be a hybrid of virtual and live programming events with a record breaking 148 films in selection, and all virtual screenings accessible for free. Running from January 13-27, 2022, the festival will screen 108 feature and 40 short films representing 25 countries, including 9 world premieres, 22 international premieres, 18 North American premieres, and 9 US premieres. The lineup holds 22 first-time feature filmmakers and an unprecedented 54 films directed by women (37% of total program). 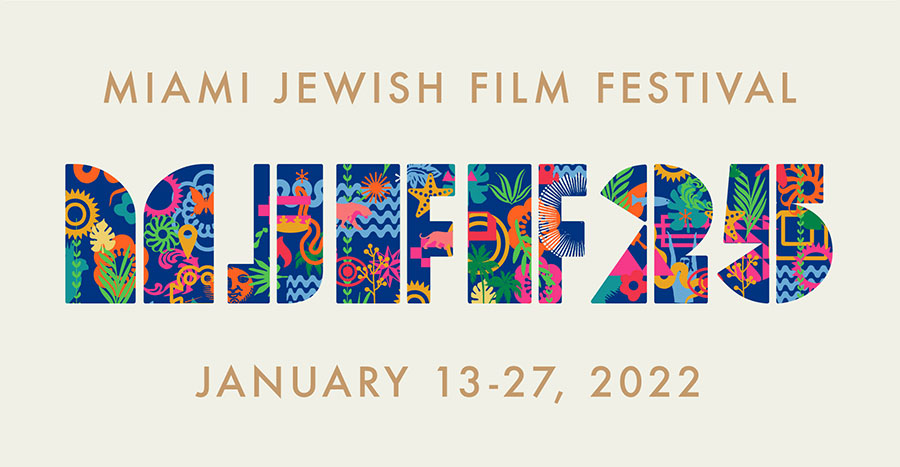 The Miami Jewish Film Festival, the largest Jewish film festival in the world, has endeavored to make its film slate as widely accessible as possible by providing its entire virtual program for free. Virtual screenings will be hosted on Eventive and will be geolocked to the state of Florida or the US. The Festival will also feature an expansive live program that will consist of popup outdoor screenings across Greater Miami at a variety of locations, including Miami Beach, Coral Gables, and North Miami-Dade, among others.

The opening night film of MJFF 2022 will be iMordecai, a heart-warming comedy that is a love letter to the city of Miami starring Academy Award-nominated and two-time Emmy-winning actor Judd Hirsch (Taxi, Independence Day) and Academy Award-nominated actors Sean Astin (The Lord of the Rings) and Carol Kane (Hester Street). As the festival’s closing night for the first time falls on Holocaust International Remembrance Day, MJFF will honor and memorialize this important day with the premiere of Vadim Perlman’s powerful Holocaust drama Persian Lessons, which is Belarus’ official entry to the Academy Awards for Best International Feature Film. Both opening and closing nights will take place at the historic North Beach Bandshell’s open-air amphitheater in Miami Beach.

Deepening its commitment to celebrating local emerging voices, MJFF is presenting a special focus on “Made in Florida” movies this year with four films receiving their world premieres in this showcase, including: the poignant Holocaust-themed film Against All Odds: Surviving the Holocaust, the touching documentary Ezra, May His Memory Be a Blessing for All, a short film about local artist Donyoni, as well as MJFF’s opening night film, iMordecai. Other Florida stories premiering at the festival are the Steve McQueen-produced Three Minutes – A Lengthening, the short film Boxed, and Sylvie from the Sunshine State, which was entirely made during the COVID-19 lockdown.

MJFF is also activating a series of pop-up roadshow events that will be hosted under the stars across Greater Miami and feature special guests, live performances, and other surprises. Highlights include the outdoor premieres at the North Beach Bandshell of the acclaimed documentary Bernstein’s Wall about legendary composer Leonard Bernstein, which will be accompanied by a special live performance by the Amernet String Quartet, as well as the premiere of Fiddler’s Journey to the Big Screen featuring a live performance of songs from the musical Fiddler on the Roof. Other notable events include an outdoor premiere at the University of Miami (UM) of The Automat, a fascinating film about America’s most iconic automat restaurant that includes interviews with luminaries such as Mel Brooks, Carl Reiner, and Ruth Bader Ginsberg. Complementing the film’s premiere will be a live discussion with director Lisa Hurwitz and Rene Rodriguez, former Miami Herald chief film critic and new manager of the Bill Cosford Cinema at UM.

On the legendary Ocean Drive strip at the historic Betsy Hotel’s rooftop, MJFF will launch its inaugural “Yiddish & Jewish Cinema Between Two Worlds” program that celebrates masterpieces of silent classic cinema. As part of its Knight Arts Challenge winning project, MJFF commissioned local artists to create original film scores that will be performed live alongside new restorations of Yiddish and Jewish silent films, including: Broken Barriers, Jewish Luck, and Hungry Hearts, which will be celebrating its centennial anniversary. South Florida artists as varied as synth musicians and rock bands have revived and contemporized this invaluable onscreen history, which captures the vibrancy of Jewish life and culture destroyed in the Holocaust. This program is made possible by the generous support of The Knight Foundation, The Betsy, and the National Center for Jewish Film.

New this year, MJFF is launching a section dedicated to Accessibility+Inclusion cinema that will showcase films that highlight the diversity and commonality of the human experience, bringing awareness and appreciation for the lives, stories, and artistic expressions of people with disabilities. Among the eight films featured in this unique program, highlights include the US premieres of the music-themed documentaries Just As I Am and Little Axel, the international premiere of the inspiring Israeli film A Reason to Live, and the premiere of the award-winning French drama The Specials, directed by Olivier Nakache & Eric Toledano (The Intouchables) and starring Vincent Cassel.

Playing in the festival’s Next Wave Competition, which is juried by 21-35-year-old college students and young professionals, are the world premieres of Converts: The Journey of Becoming Jewish and Shoah Ambassadors, two uplifting films that trace the personal journeys of Gen-Zers. Of the eleven films that are part of this competition, there are the exhilarating All Eyes Off Me that features an incendiary portrait of Israeli youth, the touching cinéma vérité Charm Circle presenting an intimate portrait of an eccentric Jewish family, the Israeli documentary Promised Lands, the unique film-within-a-film story about a son’s grief Death of Cinema and My Father Too, the gay romantic drama The Swimmer, the modern love story Tel Aviv, and the coming-of-age tale We Burn Like This, which took six years to make.

Presented in partnership with the City of Miami Beach’s OnStage! cultural arts initiative, MJFF will present free family movies nights at Miami Beach’s public parks during the festival. Kids and adults will be able to relive the magic and adventure of Steven Spielberg’s beloved family classic E.T. the Extra-Terrestrial for its 40th Anniversary at Muss Park, and enjoy a special 35th Anniversary presentation of the high-spirited fairy tale The Princess Bride at Altos Del Mark Park.

To celebrate the Miami Jewish Film Festival milestone 25th edition, it has partnered with the digital streamer ChaiFlicks to highlight some of the festival’s most acclaimed and noteworthy movies from years past. Films included in this anniversary program are 1945, Dough, Fanny’s Journey, My Polish Honeymoon, and The Women’s Balcony, which will be presented for free on MJFF’s virtual program courtesy of ChaiFlicks’ extensive film library and geo-locked to Florida residents.

Diving into the 2022 Film Festival program by the numbers, MJFF audiences will be able to experience a lineup boasting 143 film premieres, including 9 world premieres, 22 international premieres, 18 North American premieres, 9 US premieres, 36 Southeast US premieres, and 30 Florida premieres, among others, as well as over 40 conversations with filmmakers, stars, and scholars from around the world.

MORE INFORMATION:
All Festival films will be available to stream for free starting Friday, January 14 until Wednesday, January 26. More information is available at miamijewishfilmfestival.org or by calling 305-573-7304.

The Miami Jewish Film Festival is a program of the Center for the Advancement of Jewish Education (CAJE), a subsidiary of the Greater Miami Jewish Federation.